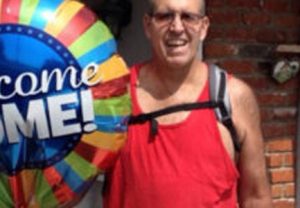 Bob was in and out of hospitals for over two decades trying to manage his cardiomyopathy, eventually developing atrial fibrillation and atrial flutter. Over the years, he was implanted with five types of pacemakers and defibrillators, but eventually, his heart began to fail rapidly and he was admitted to the hospital.

Bob, a successful Hollywood set construction supervisor, was first diagnosed with cardiomyopathy – a condition where the heart muscle becomes enlarged, thick or rigid. He also eventually developed atrial fibrillation and atrial flutter, which are abnormal heartbeats that increase the risk of stroke and heart failure.

Over time, doctors implanted five types of pacemakers and defibrillators to help manage Bob’s conditions. He took medication and was told to lose 50 pounds. Within a year of eating healthier and exercising, the former water polo player was swimming a mile a day, bicycling regularly and had lost 100 pounds.

But even though Bob was doing all the right things, his condition worsened. He began having difficulty breathing to the point that he could no longer swim for exercise. Because his lungs were continually filling with fluid, he could no longer sleep lying down. He had to sleep in a recliner just so he could breathe.

“I basically was drowning,” Bob said. “I know exactly what a fish feels like when you pull him out of the water and he’s gasping for breath.”

Bob was put on the heart transplant waiting list. When his kidneys began to fail too, surgeons approached him about using the SynCardia temporary Total Artificial Heart (TAH) to help him survive until a matching donor heart became available.

“It wasn’t a hard decision because it was either having a bridge to transplant or not be here,” said Bob, who talked with his wife, Cheree, and his brother, Jim, before making the decision. “I told doctors to sign me up. I just put it in the Lord’s hands.”