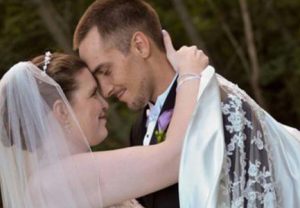 Danielle was born with Marfan syndrome, a genetic disorder that affects connective tissue. At 22 years old, doctors discovered a massive infection of her heart had led to endocarditis. Surgeons hoped to repair the damage, but as Danielle lay sedated waiting for surgery, her heart suddenly stopped beating.

Danielle was born with Marfan syndrome, a genetic disorder that affects connective tissue. When her aorta became enlarged — a common complication of the disease — Danielle underwent surgery to receive an aortic graft and a pacemaker. While she felt fine after the surgery, her energy levels never returned to normal. An active member of the dance team in high school, Danielle felt fatigued and took several long naps each day.

Two years later, when she was 22, Danielle thought she was having a hard time shaking off the flu, but her symptoms quickly worsened. When she arrived at her doctor’s office, she couldn’t even make it to the building from her car.

Danielle’s doctor sent her to the hospital immediately. Tests for pneumonia revealed that a massive infection of her heart had led to endocarditis, inflammation of the inside lining of the heart chambers and valves.

“I was told the infection was like ping pong balls all over my heart, the pacemaker wires and the valves,” said Danielle. The infection had also spread to her kidneys, spleen and lung.

After a heavy regimen of antibiotics, surgeons hoped to repair the damage to her heart, but while lying sedated in the operating room awaiting surgery, Danielle’s heart stopped. Luckily, surgeons were able to quickly transfer her to a bypass machine, saving her vital organs from further damage.

Doctors gave Danielle’s parents three options: do nothing, repair what they could before her organs gave out, or implant the SynCardia temporary Total Artificial Heart (TAH) to keep her alive until a donor heart became available. Knowing that their daughter could have a long and happy life ahead of her, her parents chose the TAH.