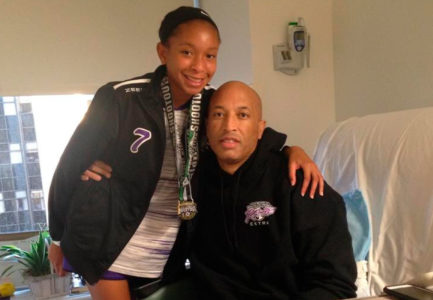 An avid basketball player and father of two, Lance has always been an active, healthy person. But during a routine checkup, his primary care physician (PCP) noticed some irregularities in his heartbeat and referred him to a cardiologist. When the cardiologist informed Lance that he was experiencing abnormal heart rhythms and he would need a pacemaker, it took Lance by surprise.

“I’d been seeing that particular doctor for probably five to 10 years and he never noticed anything drastic at all,” said Lance. “I’ve always been in shape and I didn’t have any history of heart problems, so it really threw me off.”

For about a year, everything seemed to go back to normal — Lance went about his daily routine and his pacemaker never went off. But after coming back from a trip to Las Vegas, he was suddenly overcome with exhaustion and had to stay home from work the next day.

Recognizing something wasn’t right, Lance saw his doctor, who, upon hearing his symptoms, recommended he schedule an appointment with the heart specialists at Cedars-Sinai’s Smidt Heart Institute as soon as possible.

When Lance arrived at the Smidt Heart Institute, his doctors discovered that his ejection fraction (the percentage of blood pumped out of the heart with each contraction) was less than 10% — a normal ejection fraction is about 55%.

Lance was scheduled to come back for additional testing several weeks later, but a few days before his follow-up appointment, Lance lost consciousness in the waiting room of his PCP’s office. He was rushed to a nearby Cedars-Sinai affiliate, where he was told that his condition was critical and he would have to remain in the hospital.

Lance was diagnosed with congestive heart failure caused by dilated cardiomyopathy and his health began deteriorating rapidly. He dropped nearly 50 pounds — going from 210 down to 163 — in a matter of weeks.

Lance was in desperate need of a heart transplant, but because of his size — Lance is 6’3” — his doctors estimated it could take months for a matching donor heart to become available. Because Lance wouldn’t survive the wait, his doctors knew they needed to implant a mechanical circulatory support (MCS) device to bridge Lance to a transplant.

His physicians explained that because both sides of his heart were failing (biventricular failure), implanting a left ventricular assist device (LVAD) would not work for him. The good news was that there was another option: the SynCardia temporary Total Artificial Heart (TAH).

While learning about the TAH for the first time came as a bit of a shock, it was actually Lance’s profession that helped him absorb the information and ultimately say yes to the surgery.